The Colony - In Search Of Identity
By Bernard Doove © 2003

Based on The Colony by V. Ducain

Jamie woke up and stretched all his limbs languorously. As he had done several times since he'd arrived here along with everyone else, he took stock of himself. He held out his hands - grey fur with black leopard spots. Check! He looked down and reached up to his chest. Very firm and pert fur-covered breasts, at least C-cup in size. Check! He looked back behind himself. Secondary torso with four legs all in a feline build. Check! He lifted a hind leg. Both male and female genitalia. *sigh* Check! The nightmare had not yet ended. He still seemed to be one of the creatures that someone had named 'chakats'.

Not that chakats were unattractive creatures, but up until a few days ago he had been a human male, and he did not appreciate the unwanted change of species. Nor did most of the several hundred others caught up in this bizarre situation, although some were coping very well with the change. For Jamie though, it had left him adrift in a sea of doubt and loss of identity. He sighed again and tried to go back to sleep. At least while slumbering, he didn't have to deal with the situation.

"Come on sleepyhead!" a strange voice said. "Time to get things done."

He reluctantly opened one eye to gaze upon another chakat whom he'd never met before. She... shi... (Jamie still had trouble with the new pronouns) was patterned and coloured like a Bengal tiger, with white hair and blue eyes. Jamie considered hir worthy of opening the other eye, and gazed at her in admiration. Shi was exotically beautiful and, topped-off with a pair of perfectly formed D-cup breasts, extremely sexy. Jamie felt a stirring in his loins and wrenched his eyes away from hir. ‘Let's not go through that again,’ he thought to himself.

"Can't a guy sleep in peace? It's not as if I have a nine-to-five job anymore."

"No, you don't. You have a much more important job – surviving."

‘Lord save me from these gung-ho people,’ he thought fervently. "Listen you..." he began.

"What?" he asked, his thoughts derailed.

"You're one of those who have taken a new chakat-style name then?"

"Yep. I felt it appropriate."

"Easy to remember, I admit. Were you a man or a woman before this?"

Shi shrugged. "What does it matter? That life is gone now, and I'm only interested in the present and future. This is what I am now and I intend to make the most of it."

"At least you have a handle on the situation. I really don't know who or what I am now."

"It's Jamie. Jamie Kinross actually, but I don't think that I'm going to bother with the surname anymore. I haven't met many here who are bothering to use more than one name, whether they've taken a chakat name or not."

Tigris looked thoughtful. "Y'know, aside from the first day, I haven't either. I wonder if that's part of the adaptation process or just a coincidence?"

"Like a million other questions, I don't suppose we'll ever know."

"True, unfortunately. So Jamie, what is it you do?"

"I am... or was... an electrical engineer. Not much call for that vocation in this situation."

"Perhaps, but they'll be wanting to preserve your knowledge for the future," Tigris insisted.

"Sure, but in the meantime I'm useless, and I really don't have any other useful skills."

"Every person is useful in our current circumstances..." Tigris began.

"Sure!" Jamie sneered. "I can master the art of latrine digging, or even aspire to being chief firewood gatherer."

"Oh, stop the whining self-pity!" Tigris snapped angrily. "Everyone else here has lost virtually everything also, and just because your skills aren't as immediately useful as some doesn't mean you're useless. Didn't you have any hobbies or interests that could be adapted to our needs?"

Cowed by hir vehement outburst, Jamie responded, "I like to carve wooden animals."

"What kind of carvings? Crude shapes or detailed?"

"As lifelike as possible, actually. A few people suggested that I try selling them, but I was too busy with my career to pursue that idea."

"And you don't see that as a useful skill?" Tigris asked incredulously. At Jamie’s blank stare, shi continued, "Don't you see? Until we can regain the technologies to master using metal again, our primary materials are going to be wood, stone and animal products, and anyone who has the patience and skill to do such precise work in one of those media is going to be very much in demand. I know that it isn't exactly art, but it's going to be vital for a while. And besides, I certainly hope that art isn't going to be lost to us in the quest for survival. Perhaps your sculpturing will actually be finally truly realised on this world!"

Jamie blinked in surprise. He'd been too close to the problem and had never looked beyond his career for useful skills. "I… I suppose you're right," he said with a trace of wonder.

"I’ll take you to meet White Tip and we’ll see what shi has to say."

"Huh? What do you mean by that?" Tigris asked in puzzlement.

Jamie paused briefly, not knowing how much he wanted to tell hir. "I suffered from clinical depression."

"Isn’t that mostly a chemical imbalance problem? And if so, mightn’t being transformed into a chakat cure that problem?"

"I’d say that’s quite possible. The problem I think is that I’m so used to thinking in a depressed and pessimistic manner, it’s become a habit."

Tigris grinned. "I promise to give you a kick in the rear if you start thinking that way again."

Jamie gave hir a lopsided smile. "Gee, thanks, I think. Perhaps you can help me with my self-image problem too?" he asked hopefully. He was beginning to feel an attraction for this person that transcended the mere physical attributes.

Shi eyed him speculatively. "I think you’ll have to work that out for yourself, but I don’t mind hanging around and pushing you a little," shi said with a laugh.

And so shi did. Over the next several weeks, Jamie was occasionally regretting his complaints about being usefully employed because White Tip kept him flat-out busy making various pieces of low-tech but very useful equipment. When he was done for the day though, Tigris was always waiting to join him, and they would spend the evening in companionable conversation. Then the inevitable day came when he stole a kiss from hir. After that, the dam burst, and neither could keep their hands off the other, often touching tenderly during the day, going into heavy petting at night. Soon after, Jamie came to a decision and asked hir to be his mate, to which shi joyfully agreed. That night, they made love until both were exhausted. 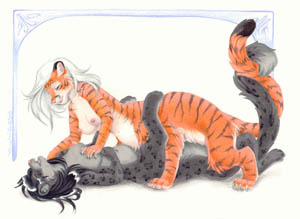 Before they succumbed to tiredness though, Jamie said, "Dear one, I love you so much. You have made me the happiest chakat in this colony tonight."

Tigris smiled indulgently back. "Thank you, but I think you’ll have to settle for a tie with me."

Jamie grinned. "Okay, I can accept that." He looked thoughtful for a moment, then asked, "Are you ever going to tell me whether you were male or female when you were human?"

When shi didn’t say any more, he prompted, "And that would be when?"

"On the day when the answer to that question will make utterly no difference to you." More than that, shi would not say.

Jamie proudly gazed upon his… no, hir (shi still kept having trouble with the herm terms) cub. The white and grey-striped child was the epitome of cuteness, but shi was also the answer to Jamie’s long-standing question. As hir child suckled at hir breast, shi thought again of the question shi had asked so long ago – ‘Who and what am I?’ Shi had the answer ready this time – ‘I am a mother’, and for now that was the most important thing in hir life.

Follow the paws back to the Chakat's DenTM main page.